Find out what Bachata is, understand the different styles, the music and the history behind it and how it’s evolved over the years.

Take a look at our Bachata Classes in Cardiff here!

If you’ve even been to a salsa party, then you’ve probably seen the dancers dancing to slower songs and wondered what steps they are doing, or perhaps you already know the basics of Bachata but want a deeper understanding behind the dance.

Bachata is a beautiful and sensual dance, that is all about the hips! Contrasting to salsa, the music and energy of the dance is slower however the leading and following signals are mostly the same (most of the turns and routine patterns are taken straight from salsa!)

Originally a mix of other dances such as Merengue, Son Cubano and Bolero, and over time, it has been influenced by other dance styles and has incorporated some of these stylings and movements especially from contemporary and modern dance, hip-hop and ballroom to become what we know today as Bachata.

The hips were the used to communicate and express feelings towards another person, and it is even said that bachata dancing was actually used as a “mating call”, two dances with the same partner “sealed the deal”. 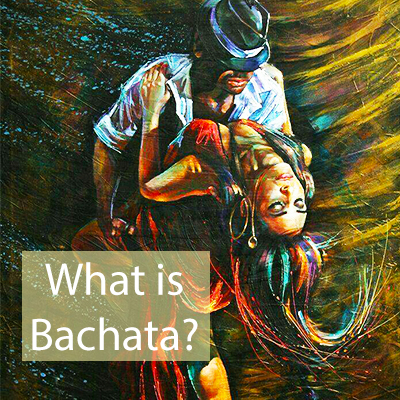 The modern basic steps are danced moving on the side on the counts 1,2,3 and 5,6,7 with a tap on 4 and 8 (the dominican basic step follows the same concept but in a square shape rather than side to side). The hips are the highlight of this dance, however the movement should come naturally with the change of weight as you step and NOT from conscious movement, the tap on 4 and 8 involves an emphasis on the hips however again should come from the natural affect of pressing the foot into the ground while straightening the knee.

The weight is best kept forward on the ball of the foot for easy weight transferral and easy spins, the knees are kept softly bent during the dance to allow control over the lower half of the body, the torso and upper body move independently from the lower half.

The music is counted similar to Salsa, known as 4/4 time, when we dance we count up to 8 for a full musical phrase, true Dominican bachata is very fast and uses African rhythms and was know as “La Musica del Amargue”, bitter or sad music that usually sung of lost loves and sufferings. As the music and dance has spread over the world, the music has been influenced by other styles and popular music.

The Bachata Band – consists of the lead guitar (requinto), rhythmic guitar, bass guitar, bongos and the guira, as well as a lead and back-up singers.

Some more traditional sounding bands include Aventura and Grupo Extra. Now recognised mostly as being a slower beat with a strong beat that is usually easy to recognise. Over the 2000’s more Bachata artists began releasing new hits, using electronic synths and sounds and following a standard pop music structure (artists such as Romeo Santos and Toby Love). As the demand for new music is growing there are many new DJ’s emerging (check out DJ Tronky) with covers of popular songs turned Bachata.

Bachata came about in the 1960’s in the Dominican Republic when times were tough and with strict censorship coming from the Dominican dictator Trujillo, when he died the first Bachata songs were recorded. Dominican bachata music was originally not accepted by the countries elite, and was not broadcast on the radio because they believed it to be crude, vulgar and related to rural crime. However it’s charm eventually broke through the prejudice and it’s popularity soared, and that’s when the first “bachateros” were born, now this dance has made it’s way around the world and developed and incorporated many different styles along the way!

This is the closest style to the traditional style that originated in the Dominican Republic. It is quite fast and involves fast footwork and turns, alternating between open and closed positions with each partner using freestyle movements that can be different or echo each others movements. The transition of weight between from each foot means that the attention is on the hips (especially for the ladies!)

It takes a little bit more practice to master this style but is very satisfying and becoming very trendy in the dancing scene.

Sensual bachata is very trendy in the dance scene, it is the slowest musically, using more stretched out movements that are all about the atmosphere and connection between the couple, it also requires less complicated footwork than the other styles.

Sensual bachata is danced best with a regular partner that you are comfortable dancing with very close, often involving intertwined legs, body waves and intimate leading techniques, these techniques can also be difficult to understand for someone who has not been to sensual bachata classes.

Modern or Urban Bachata rose to popularity in 2005 in Spain, it is a fusion of many styles that follow the basic leading and following rules of partner dancing, however with added elements of hip hop, salsa, tango, zouk, dancehall and contemporary and Latin ballroom.

Usually the music is a bachata cover of a popular song, Urban bachata is a very demanding style and requires a lot of energy and different techniques. A style that is great for creative stage performances.

As the dance continues developing and taking on new influences, we see a new style called Bachatango emerge. It is a dance that is more often performed than used in the social.

Bachatango can only be performed when the music calls the steps, and requires not only the leading and following skills for bachata but also for tango for both partners. It is generally more impressive with fancy lifts and tricks which can only be done with dance partners and more often on stage. Generally a lady in the social will not recognise a lead signal that requires tango footwork.

More from our dance blog, news and articles here.

Dance & Santeria Ogun: The Warrior and Hunter About Ogun...

Dance Artists – Bachata Daniel y Desiree Who Are They?...